With every quarter comes the time to reflect: Did you sell in a way that matched the potential you had from leads and territories? Or did you fall short? Did you understand the best regions to target with sales efforts?

As with eSpatial’s mapping functions, no one should simply jump into a ZIP code radius map and expect to know how to make the most of it. Some perspective and preparation is necessary.

Sales managers know that to maximize their sales reps’ chances at success, they need to draw up territories in a way that makes for a truly equitable playing field. Building a radius map with the powerful eSpatial platform can optimize your understanding and leveraging of ZIP codes, which may be just the ticket for the start of the next quarter’s sales campaign.

How does the ZIP code system work? A refresher

The modern U.S. is broken down into about 42,000 five-digit ZIP codes, per the U.S. Postal Service. For the country’s postal workers, they’ve been the most efficient way to organize the general delivery of mail since the service switched over from zone-based mailing in 1963.

The first number (0 through 9) represents one of 10 different large American regions, from 0 in the northeastern U.S. to 9 out in California. The next two digits refer to highly populated areas (large cities, etc.) and big Postal Service distribution centers. The final two digits pinpoint the post office serving a given city or neighborhood. Four other digits, separated from the main code by a hyphen, provide even more specificity, right down to multi-block areas or segments of streets. (Don’t worry: Only actual postal workers need to worry about any of those four.)

How do you find the radius of a ZIP code?

Determining the ZIP codes in a given region based on radius is simple, whether you’re using a free map tool or a sophisticated software solution like eSpatial. Select a point on your map and set your radius distance.

Using Boston, Massachusetts, and the downtown ZIP code 02109, and assigning a buffer of 10 miles, you find that there are almost 120 five-digit ZIP codes in that relatively small radius. In a major metropolitan area of a much different state, like Albuquerque, New Mexico, you’ll get much different results: just 39 in a 10-mile radius of the local ZIP code 87111. 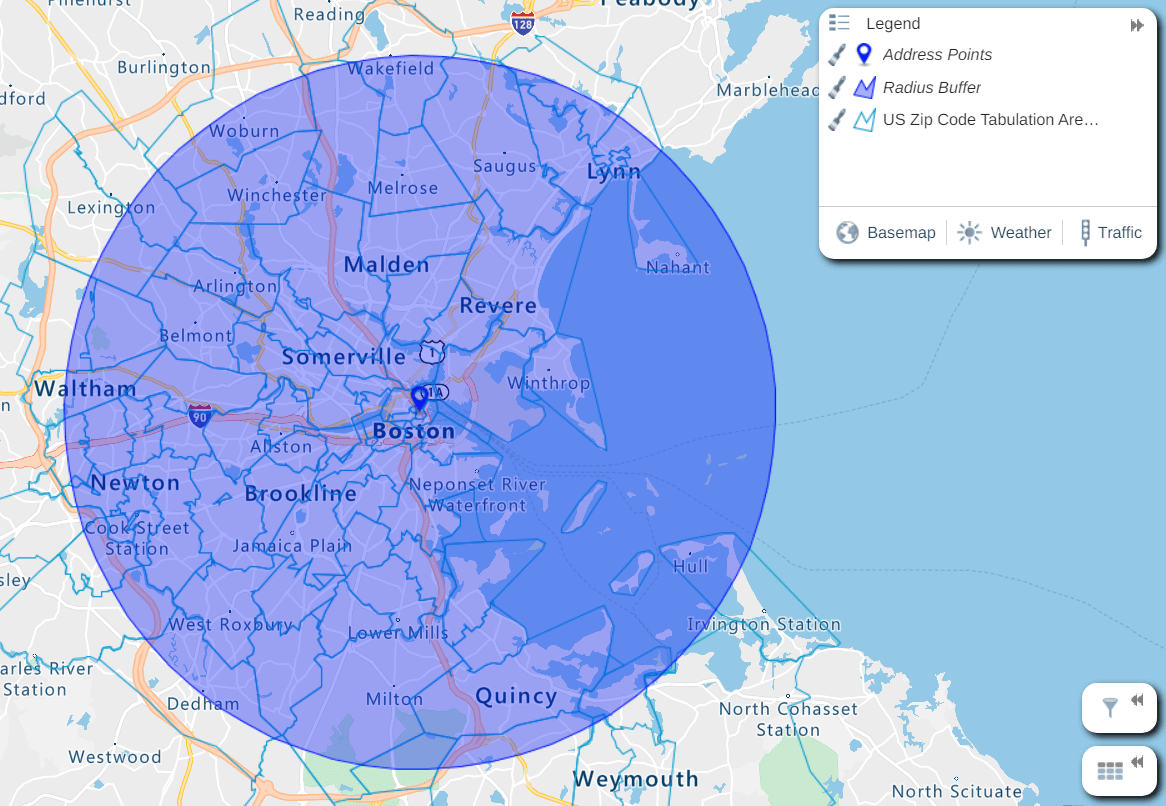 How do you make a ZIP code radius map for sales territories?

You don’t have to get incredibly specific when using a cluster of ZIP codes as one of the key data sets on a radius map for sales purposes. In fact, when you’re putting together sales territories, you’ll likely find the first three digits more useful than anything else: For example, you could split Boston into two territories based on its 021 and 022 ZIP codes. By contrast, for less densely populated places (like South Dakota, which is covered in total by eight three-digit codes), two or three reps might be all you need for an entire state.

You’d also have to take drive time into account when devising quotas for reps in sparsely populated areas, though. It’d be unreasonable to expect a rep with a half-dozen customers in a spread-out territory to match the quota of a salesperson serving two dozen clients in and around a major city.

To make the most of eSpatial in terms of ZIP code radius maps, you’ll want to introduce more data. Common points of analysis relevant to ZIP-code mapping would be sales reps, retail store locations, warehouses, clients, and competitor presences. Once you’ve determined the number of sales prospects within the various zip codes of a particular radius, you can have a better understanding of what each area needs. This will better allow you to draw new territory boundaries.

In an ideal world, you want all of your sales reps to be performing at a high level (or, at the very least, to all have decent numbers). The best way to do this is by making sure every seller has a reasonable opportunity to succeed — which starts with a high-potential territory.

eSpatial allows you to use ZIP code and radius as key metrics for creating reps’ workloads. For example, you could define each territory as all ZIP codes within a 90-mile radius of your company’s headquarters (or reps’ individual homes, depending on drive time and general preference).

Once you’re in the eSpatial Territory Builder interface, start by clicking Add Territory. You can add a new starting point for the map by clicking Add an Address Point and dropping a pin on the location in question, or by looking up the point in the Address Search Bar.

Whichever you end up doing, hover over the map pin you just created and you’ll see a pop-up box identifying the location. In the box’s lower left, find and click the Buffer button. This prompts you to select Radius or Drive Time from a small drop-down — click the former. 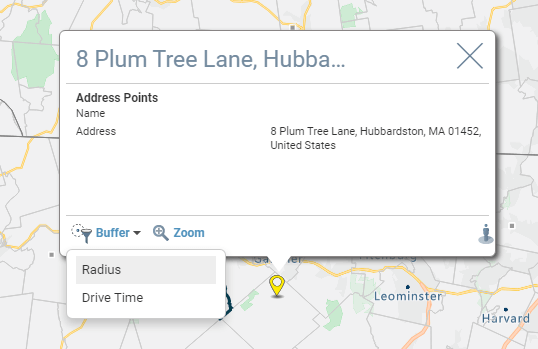 Then, assign the proper distance and unit of measurement. For densely populated regions with multiple major cities, you don’t want the radius buffer to be too large because traffic will make drive times longer than they objectively should be in the territory being covered. Also, keep in mind that 120 minutes is the longest period you can establish with the eSpatial Drive Time buffer. You’ll want to cross-reference that with radius so you’re not defining territories on distance alone. 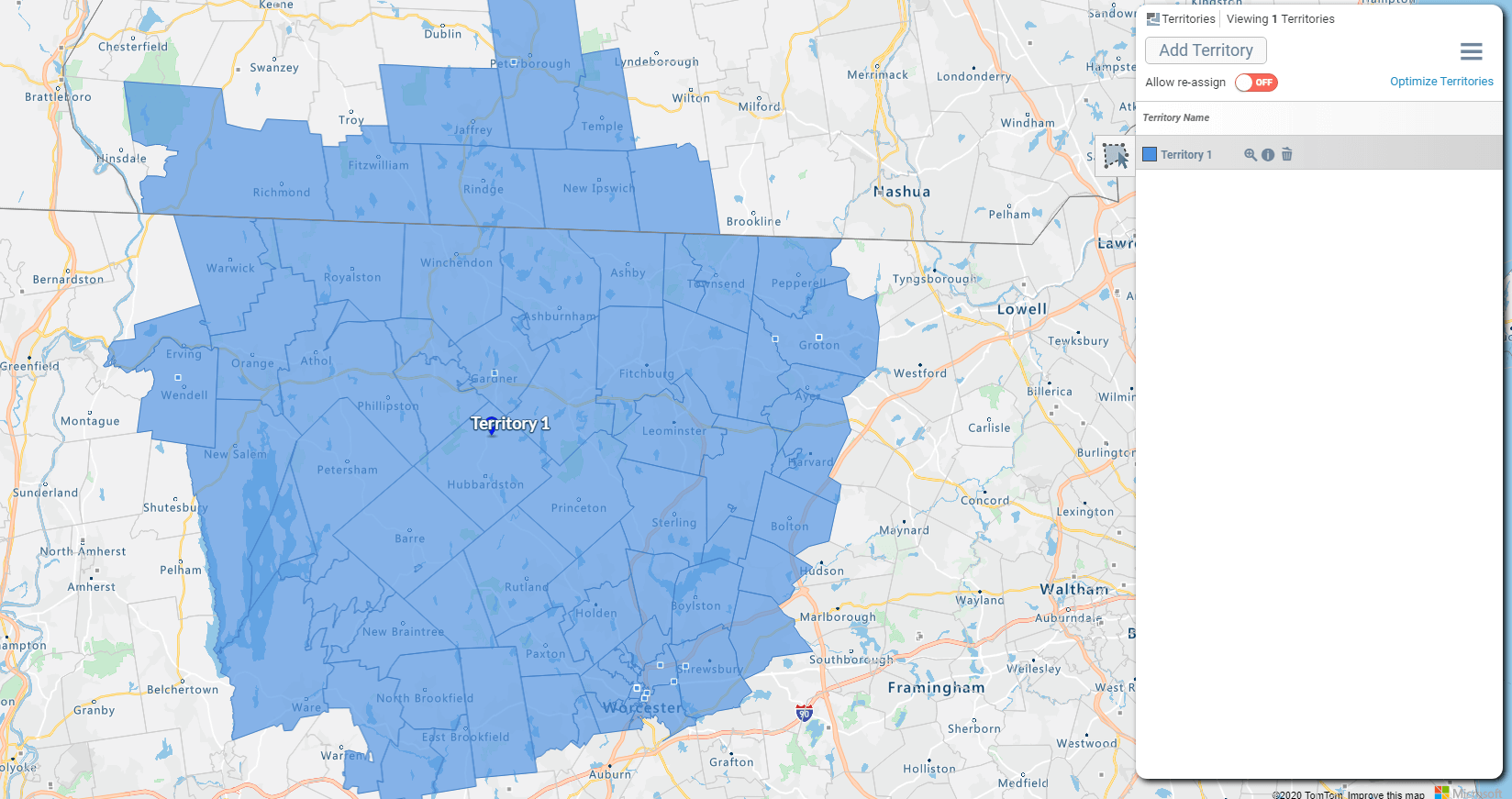 Territories can also be built quickly and easily using the radius function.

To learn more about the flexibility of eSpatial for territory creation, contact us or sign up to begin a free trial!

Eoin is an eSpatial mapping expert with more than 10 years of experience in the field. He specializes in using mapping to help sales and marketing professionals target revenue growth, make cost reductions and improve customer service.

Create a report that displays quarterly sales by territory

How to report sales data in presentations

How Do I Make a Custom Territory Map?

Strategic Planning for Sales Territories: Creating a Roadmap for the Future