This data was obtained from statistics Canada’s 2011 Canadian census. The Canadian language datasets provided by eSpatial can be used to examine and analyse the language characteristics of the Canadian population. These datasets can be used in conjunction with the eSpatial mapping software to create reports which investigate the languages which are spoken across Canada. Reports can be generated which examine the populations knowledge of English, French and non-official Canadian languages as well the natively spoken languages across Canada. These reports can be generated at the Canadian province/territory, census division and census metropolitan/agglomeration area geographical levels. You can also link and connect your own personal or commercial data to these datasets. The language characteristics of Canada can also therefore be analysed in relation to your own data. Below is an example of a simple Canadian language report. This report was designed by eSpatial to illustrate how to get the most out of the eSpatial mapping software and the data it provides. 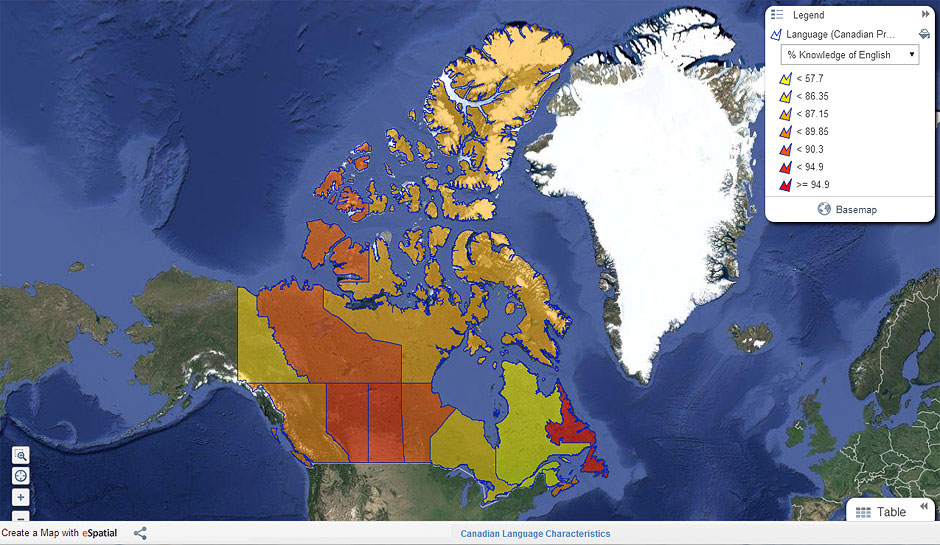 Firstly the topic reflected in the map can be changed quickly and easily simply by selecting the map this field option. Once this option has been selected the map will change to reflect the values in this topic (e.g. select the map this field option on % Knowledge of French to see these values mapped in relation to Canada’s provinces and territories). Secondly the report can be sorted in ascending or descending order. This is useful when trying to decipher quickly which areas have the highest/lowest values (e.g. select sort ascending on % Native language: English to see which province/territory has the lowest proportion of native English speakers). Finally the report can also be filtered by specific values. This is useful when trying to quickly search for areas with specific values (e.g. select filter results on % Native language: French so that provinces/territories in which 25 to 50 percent of the population are native French speakers are only displayed on the map).