This data was obtained from statistics Canada’s 2011 Canadian census. You can use this data in eSpatial to analyze Canadian household composition. These datasets can be used in conjunction with the eSpatial mapping software to create reports investigating the type of households across Canada. Reports can be generated to examine households with and without children as well as lone-parent, single person and multi-family households. These reports can be generated at the Canadian province/territory, census division and census metropolitan/agglomeration area levels. You can also link and connect your own personal or commercial data to these datasets. Household composition across Canada can also be analyzed in relation to your own data. Below is an example of a simple Canadian household type report. 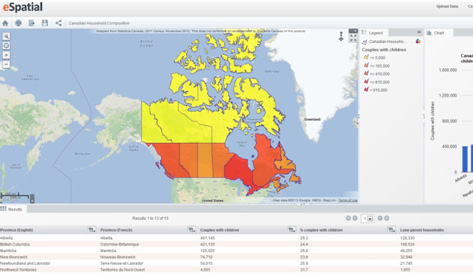