This data was obtained from statistics Canada’s 2011 Canadian census. The Canadian age/sex datasets provided by eSpatial can be used to examine and analyze the Canadian population in relation to different age and sex categories. These datasets can be used in conjunction with the eSpatial mapping software to create reports that investigate the age and sex demographics of Canada. Reports can be generated that examine the age structure of the total population, male population and female population within Canada at the province/territory, census division and census metropolitan/agglomeration area geographical levels. You can also link and connect your own personal or commercial data to these datasets. The age and sex demographics of Canada can also therefore be analyzed in relation to your own data. Below is an example of a simple Canadian age/sex report. This report was designed by eSpatial to illustrate how to get the most out of the eSpatial mapping software and the data it provides. 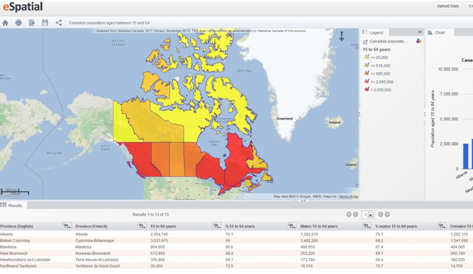 A simple report was created using eSpatial’s age/sex (Canadian provinces/territories) dataset. This report examines the Canadian population in relation to people aged between 15 and 64. This dataset offers a number of different age categories that can be reported on, but for the purpose of this report the 15 to 64 age category was chosen as an example.