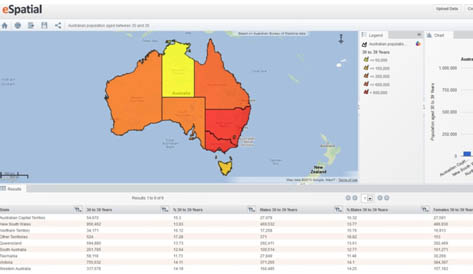 A simple report was created using the eSpatial mapping software and the Age/Sex (Australian States) dataset it provides. This report examines the Australian population in relation to people aged between 30 and 39. The Australian age/sex datasets provided by eSpatial offer a number of different age categories which can be reported on but for the purpose of this report the 30 to 39 age category was chosen as an example.

Australian states are colored and categorized according to the number of people aged between 30 and 39 within them. The graduated color scheme adopted by eSpatial mapping software allows for a quick and easy analysis of this data. It is evident from the map that yellow colored states (e.g. Northern Territory) have the lowest number of people aged between 30 to 39 living within them, less than 50,000 people while red colored states (e.g. New South Wales) have the most people in this age category with more than 600,000 people. It is also therefore easy to surmise that the amount of people aged between 30 and 39 living in the light orange (e.g. Tasmania), orange (e.g. South Australia) and dark orange (e.g. Queensland) colored states lies somewhere between 50,000 and 600,000 people respectively.